James’ mother develops disturbing symptoms. She begins to transition James to a girl. She tries to do anything to remove James’ father from his life.

AFTER THE BIRTH OF THE BOYS, Mr. Younger became the primary care-giver to the boys. He worked from home and had a flexible schedule. Ms. Georgulas worked 60-80 hours a week as a physician in private practice with no way to share calls. The Father raised both his sons and his step- daughters, Sydney and Zoe. He took the step-daughters to school, helped them with their homework, and generally performed all parenting func- tions for Ms. Georgulas. Father also had a nanny, Erika Garcia, to help with raising four children alone.

Both step-daughters attended a private Christian school, Coram Deo. Mr. Younger volunteered to serve on the board of the school. He helped transition the school to a new mathematics program and created financial models for the Headmaster. Mr. Younger’s thrice weekly commute to the girl’s school was over two hours. During this time, he usually brought the boys and taught them songs in the car.

IN 2015, MS. GEORGULAS HAD THREE BREAKDOWNS, at the culmination of her decision to harm the Father and the boys. After the pregnancy, she experienced serious post-partem depression. Mr. Younger says confidently that she never really came out of it, even years later.

MS. GEORGULAS HATCHES A PLOT TO REMOVE THE FATHER FROM THE HOME. It began with the manipulation of licensed caregivers. After her breakdown episodes, Ms. Georgulas began to take her two daughters out in the evening, leaving Father home with the boys for three to four hours to put them to bed. She did this almost every night for several weeks. The girls began to be very rude to Mr. Younger, and Ms. Georgulas seemed quite amused by their bad behavior.

Zoe told Mr. Younger one night, “You know you can’t win,” Mr. Younger had no idea what she wanted to win. “I’m going to kick you to the Motel 6,” she said. Sure enough, that is what Ms. Georgulas planned. One weekend, Mr. Younger was outside working in the yard. He came back in to the home office to look something up on YouTube. Apparently, Ms. Georgulas thought he was still outside. She was instructing the girls on what to tell psychologists. She told them to say: (1) they were de- pressed and sad most of the time; (2) they “just don’t want to do anything anymore”; (3) they were feeling worthless and tired all the time; (4) they were thinking of suicide and dark things about death.

MR. YOUNGER MOVED TO AN APARTMENT A COUPLE OF MILES UP THE ROAD from Ms. Georgulas’s home on 28 April 2015. She needlessly insisted that Mr. Younger leave by 05 April, causing Mr. Younger to incur hotel expenses.10 We agreed on a 50-50 split caring for the boys. We had equal time and an equal number of days.

Ms. Georgulas started at this time to assume all parenting decisions, overruling or not informing Mr. Younger of important issues. Mr. Younger had done an exhaustive review of preschools, and had narrowed it down to two. Ms. Georgulas decided on Spanish Schoolhouse, and then wouldn’t budge. Mr. Younger went along with it, because it was in the top two schools.11 But even then, co-parenting meant doing what Ms. Georgulas wanted. It soon became clear that what she wanted was quite evil.

MS. GEORGULAS USED THE LEGAL SYSTEM FOR SOCIAL VIOLENCE. Using the discovery rules, they forced Mr. Younger to research and provide thousands of pages of documents. Most of them irrelevant to the case, but running up costs. They took Mr. Younger to court over, and over, and over – a dozen or more times – on Motions to Compel. They could never be satisfied that all document that had been turned over. All the while, Ms. Georgulas never turned over information about her bank accounts with millions of dollars. Eventually, Father had to represent himself against the socially violent onslaught funded by Ms. Georgulas’s millions of dollars.

One of Ms. Georgulas’s legal strategies was particularly damaging to Mr. Younger. She subpoenaed every single recruiter, contractor, employer, everyone with whom he’d tried to get a job. Ms. Georgulas cost those companies tens of thousands of dollars, some for merely corresponding with Mr. Younger about a job by email! The legal harassment was so over the top, Judge Beauchamp said to Ms. Georgulas, “This is the most prolific case I’ve seen in fourteen years!”

THE SOCIAL VIOLENCE ESCALATED TO INTENSE REPUTATION DE- STRUCTION. Ms. Georgulas instructed her daughters to spread innuendo and lies about Mr. Younger at church. She tried everything possible to drive him away from the church where his own sons were baptized. For years, many people at the church would not speak with Mr. Younger. It was only later, after seeing how Ms. Georgulas was abusing James that they realized who was truly violent and unstable.

At every one of the numerous hearings before the Associate Judge, Ms. Georgulas relentlessly attacked Mr. Younger’s reputation as a father, a husband, and a man. There was literally no lie she wouldn’t tell to “win” the divorce. This carried over into the custody evaluation.

THE CUSTODY EVALUATOR’S RECOMMENDATIONS WERE STRUCK BY THE COURT. They were just that biased and that clearly corrupt. The most egregious corruption happened in the hearing on the Motion to Strike the report. Kim Meaders texted Blake Mitchell right in the court room during the hearing. The bailiff almost arrested Blake Mitchell for refusing to stop. When the bailiff informed the judge, she wasted no time in striking the report. She knew it was the result of a corrupt process.

Throughout the custody evaluation process, Mr. Younger found the evaluator to be biased and inconsistent in his questioning. His report was equally inconsistent. Here are some of the worst examples of Blake Mitchell’s corruption and bias.

Different questions to the character references. Blake Mitchell asked Ms. Georgulas’s references how they viewed her as a mother. Of course, they were uniformly positive. When Mitchell inquired of Mr. Younger’s character witnesses, he asked two questions: How do you view Mr. Younger as a father? What could he do better? This was done to elicit negative information about Mr. Younger but not about Ms. Georgulas.

Improper inferences from psychological testing. Mitchell wrote in his report that Ms. Georgulas’s MMPI results are consistent with an educated person of the upper class. When no such inference of that nature could be drawn from the data.

Failure to investigate explosive claims of gender identity manipulation. Mr. Younger spent considerable time explaining to Blake Mitchell the despicable manipulation of James’s gender self-identity by Ms. Georgulas. Mitchell literally laughed at Mr. Younger. He said there was no evidence of it and that he would not investigate it. That is also what he wrote in his report, “no evidence.” This, despite the fact that Mr. Younger showed him a video clearly showing that such manipulation was going on. Mr. Younger included it in his written summary of custody issues which he provided to Blake Mitchell at his request. This is a total failure of the custody evaluator’s role. Without corruption, there is no way that could slip through Blake Mitchell’s analysis.

THE DIVORCE WAS A FINANCIAL DISASTER FOR MR. YOUNGER. Ms. Georgulas was successfully able to get the judge to declare an annulment after four years of marriage and two children, for the sole purpose of breaking the prenuptial agreement. Mr. Younger had to pay Ms. Georgulas for his own truck, about $50,000. He was also assessed near maximal child support. After the massive social violence meted out by Ms. Georgulas in regard to Mr. Younger’s employment, it was difficult to make ends meet.

MS. GEORGULAS FORCES JAMES TO COME OUT AS A GIRL. At James’s fifth birthday party, an event full of people from church, Ms. Georgulas forced the boy to wear a dress. Witnesses tell Mr. Younger that his son hid in a corner and cried. Again, this occurred because Blake Mitchell failed to do his one job of investigation to protect kids.

Ms. Georgulas enrolled James in school as a girl. She then proceeded to deny Mr. Younger custody many times, if the Father’s posses- sion time fell on a school event. She has successfully used the gender issue to pry the Father out of the boy’s school life.

James dresses as a girl at school. Goes by a girl’s name. Uses the girl’s restroom. All his authority figures at school affirm he is a girl — teachers, principals, police officers, peer students, librarian. This child is being lied to by the very institutions that should be protecting him. It’s all being instigated by Ms. Georgulas to get the Father out of the child’s life, because she knows Father will not and cannot affirm his son is a girl. Ms. Georgulas has found the perfect and timely strategy to chisel off the little remaining influence the Father has.

JAMES NEVER SELF-IDENTIFIES AS A GIRL OUTSIDE MS. GEORGULAS’S HOME. When with his Father, James is a normal boy and acts like a normal boy. He does not exhibit any liking for girls toys, steadfastly refuses to wear girl’s clothes, refuses to engage in typical girl’s play, is in fact hyper-athletic. The purported gender dysphoria affecting James never shows up at his Father’s home. This can be attested by scores of witnesses. The only time we see James exhibiting a female gender self-expression is with Ms. Georgulas.

MS. GEORGULAS IS USING THIS ISSUE TO TAKE THE KIDS FROM MR. YOUNGER. Ms. Georgulas is well aware that Father’s religious beliefs preclude any affirmation of a false gender self-identity. Ms. Georgulas has chosen to intentionally socialize James to a false gender self-identity to push the Father out of the child’s life. It is the most unimaginably cruel form of parental alienation one can imagine.

And we need to consider the effects of all this abuse on James’s brother Jude. He is forced to lie about James against his conscience and religious beliefs. Jude can plainly see his brother James is a boy. He is very distressed by the incongruity between his personal knowledge and what he is forced to affirm. It’s a despicable form of psychological manipulation rising to the level of abuse, perpetrated by Ms. Georgulas. James always dresses as a boy when Father comes to get the boys. 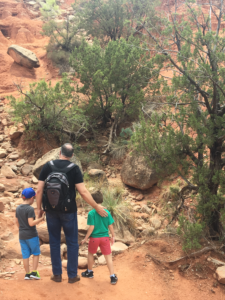